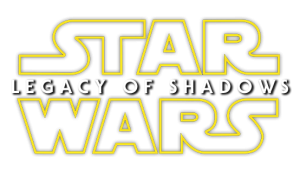 The Treaty of Coruscant is at breaking point. The Sith Empire seeks to press its military advantage while the Galactic Republic fractures under its own disputes.

As both sides push for dominance in the Cold War, a new opportunity has arisen. Mysterious signals have sprung up, leading to ruins of the long-dead INFINITE EMPIRE scattered across the galaxy. These advanced technologies and secrets of the Force could give either side a key advantage in the oncoming conflict.

Now, both Republic and Sith assemble elite teams to bring back these prizes, or seize them before their enemies do…

Legacy of Shadows is a Star Wars writing group set during the era of Bioware’s The Old Republic. As the tenuous peace treaty breaks down and the cold war tensions rise, both the Sith Empire and the Galactic Republic vie for the upper hand in the oncoming conflict. Legacy of Shadows focuses on a particular contest between factions, as both pick up signals matching those from devices of the Infinite Empire, the ancient Ratakan civilisation that once dominated the galaxy through their technology powered by their control of the Dark Side of the Force. To seize the technology and knowledge for themselves, and – just as importantly – to stop it from falling into the enemy hands, both the Republic and the Sith assemble task forces, elite units, and small crews to go forth into the galaxy and get to these beacons, and their secrets, first.

As such, players in Legacy of Shadows are not responsible for individual characters in a wider crew, but whole teams affiliated with either faction. Anyone who joins is free to develop a whole host of characters engaging in this galactic-wide treasure hunt, as part of either the Republic’s Operation Candlewick of the Empire’s Stormbird Initiative. While a large part of Legacy’s fun is players coming up with ideas together and contributing collectively to a wider story of the hunt for Infinite Empire technology, and the consequences this has across the galaxy, Legacy is designed for players to write Star Wars adventures in their own time and at their own pace. Of course, nothing stops a group of players from building a team together for a more traditional role-play experience.