We might be at the end of Phase 1 for our competitions – but the storytelling continues, and Echoes of the Tkon is keeping up its break-neck pace! It’s time for our second weekly update of all the grand tales coming out of Bravo Fleet, with special thanks to MJ for helping the Lore Office keep track this time around, because you’ve been writing so bloody much! Keep it up! 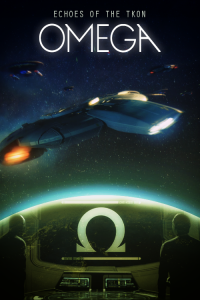 Rear Admiral Hayden and Captain Lancaster are confronted with multiple appearances of Omega in the sector the Arcturus is currently exploring. Realising the threat that now confronts them, they swing into action without wasting time. Not wanting to have non-essential crew members involved in dealing with the crisis, the Odyssey-class ship separates but as Captain Lancaster prepares to lead their efforts they receive a distress call from the people they had just visited. With multiple crew trying to understand what is happening, Captain Lancaster is supported by his Chief Medical Officer, a former hospital ship captain, in making ready to take on the dangerous task at hand.

An already complicated rescue mission of a pre-warp civilisation is made more difficult when members of Captain Adams’ crew disagree with the mission they are undertaking. Having to confine her chief science officer to the brig, Captain Adams completes her mission of saving the people she was sent to rescue from Omega. Thankfully with the use of Starfleet’s advanced medical technology, the pre-warp civilisation has their memory of their rescue removed from their minds before they are returned to their homes. Captain Adams departs the system for Devron Fleet Yards while having to deal with punishing those who would not follow her orders.

Thinking a simple mission to remove the omega threat could be undertaken, Captain Rourke is placed between a rock and a hard place as he has to make a decision that risks giving the Romulans access to Omega’s powerful secrets. Pressed to send others on the mission he had planned to command, Rourke must deal with a Romulan scout attempting to steal Omega, and when he believes they have it, he is forced to give the order to destroy them. As members of his own command staff refuse to oblige, he is supported by his trusted first officer, who steps in and resolves the situation in his favour. The Romulan scout is eventually destroyed, but at the cost of two members of Rourke’s senior staff being placed in the brig. Thankfully, Omega is neutralised by the heroic efforts of Endeavour’s chief science officer and chief engineer. Rourke is left wondering though how things would have panned out if it hadn’t been for Commander Valance, his loyal first officer stepping in and following his orders.

Being forced to improvise by what they are doing so she can enact the Omega Directive, recently promoted Captain Theodoras has her crew plan to blow up a white dwarf star while at the same time deal with the Borg who are keen to find out what the crew of the Atlantis is up to. With only a short amount of time to complete their mission, With nine Omega molecules having to be dealt with, the crew comes up with an ingenious plan to blow up a star, destroy a Borg vessel and close a subspace flexure all at the same time. Leaving everything down to the computer to ensure success, the ship proceeds with its plan and luckily the Atlantis crew succeed in their mission but catch the attention of a cybernetic rival who are keen to know more about them…

Alone with just a holographic crew around him, Captain McCallister (now on board the Aquarius) proceeds with his mission to destroy the Omega molecules that the Kraylor have got their hands on. However, the captain takes up the offer from the Kraylor captain they rescued to assist him and along the way the two captains realise just how different they truly are. Skeptical that she could help him, McCallister’s guest requests to take a step back as she does not feel she could truly betray her people and is quite taken back by McCallister’s almost ruthless approach in doing whatever it takes to get the job done. With her undergoing treatment to forget everything since being rescued in Aquarius’ sickbay, McCallister relies on his holographic crew to ensure the success of his mission. Meanwhile on the Odyssey, the crew that are left behind have more to deal with as two Kraylor vessels arrive and demand to have their people and property returned to them. Coming up with a cunning and devious plan to give their captain more time, Odyssey’s chief medical officer declares that the Kraylor they rescued are ill and need to be treated to avoid an outbreak. The deception works and McCallister eventually returns. However, to avoid anyone finding out what he did in using the Omega Directive, the captain destroys the Aquarius and follows through with the lies shared with the Kraylor. At the end of the mission, McCallister has one final bombshell dropped on him: the resignation of his trusted first officer.

Reeling from the losses of recent missions, Captain Vax learns her political enemies are positioning themselves against her. Before matters can come to a head, however, she and the Heracles are dispatched to the Gamma Quadrant to respond to a detected outbreak of Omega molecules. Managing the uncertainties of her crew, kept in the dark by the necessities of the Omega Directive, Captain Vax leads her ship through the Bajoran Wormhole and into the Gamma Quadrant, heading for the Hunter Sector…

After liberating a Romulan world from its former noble leader, Captain Sidda Sadovu and her crew of misfits, find themselves stuck between Federation forces as they move closely around the Federation-Romulan Republic border engaging in unusual activities. What makes it worse for the trader is the delay in her meeting with her business partners. What is Starfleet up to and why are there so many ships closeby?

While participating in an archeological dig on M-113, Lieutenant Kari comes into proximity of something that no-one else has found so far. After scanning the object, she determines it is a containment device. Her tricorder recognises boronite but the blue, pulsing energy source is something she has never come across before. Reporting into her commanding officer, she is quickly rushed out of the scene and ordered not to share with anyone what she has encountered. Curious with her discovery, the lieutenant is forced to follow orders as a specialist team comes in and takes over from her work.

A routine operation for Captain McClellan comes to a halt with the detection of Omega molecules and the implementation of the Omega Directive. Meanwhile, a team of specialists trained to find and destroy Omega on the runabout Zebulon Pike navigate the complexities of an outbreak in the civilised region of a pre-warp world.

While trying to settle his new chief engineer in, Captain Scotto is forced to deal with the Omega Directive. Going from one crisis to the next appears to be a recurring theme for Captain Scotto as he briefs his crew on what to expect with the limited information he can share. Thankfully, Starfleet are preparing to send in a specialist team to assist with the mission while the Devastator crew prepare to support in the evacuation of nearby Federation colonists.

Tensions rise on the Atlantia as Captain Hess has to stop her first officer from poking his nose into matters that do not concern him. Furthermore, when they finally reach their destination they discover it was home to a once advanced civilisation who had been testing with omega particles. When it appears an explosion has gone off in one of their cities, Hess leads an away team down to the planet to beam the remaining particles back to her ship. When the harmonic resonance chamber fails to contain Omega, Hess is forced to open fire on the planet with gravimetric torpedoes instead. Successfully they destroy Omega, but leave the lifeless planet behind now ripped apart from their attack.

Preparing for his upcoming mission in dealing with the Omega menace, Captain Ransom attempts to quell the concerns of his first officer who finds it difficult to comprehend that there are things in Starfleet that Ransom can’t share with him. Somewhat successful with his attempts, Ransom now prepares to face the omega crisis while deep in the Delta Quadrant.

A precarious offer from a Vulcan commodore, a chance of redemption in a dangerous area of space and an opportunity to return to the captain’s chair, Walter Jones undertakes a mission of great importance for the Federation. However the mission is sold to him in being a simple courier based one, but it is a lot more than that when he knows one of his passengers and soon finds him fleeting from something endangers his ship that none of them recognise.

Forced to comply with the Omega Directive, Captain Carter is left with no choice but to destroy a primitive space station owned by a pre-warp civilisation. After this, the crew of the Centaur must deal with their Klingon problem when their ship and the USS Don S. Davis is attacked by them. With so much commotion happening, Captain Carter and his crew are successful in pushing their adversary away, but for how long?

Captain MacLeod recalls his briefing about Omega as he prepares to lead the USS Sutherland in supporting other Federation ships in removing the threat the powerful molecule poses to the galaxy.

A secret signal places the Solstice and its crew in the hands of a specialist team, but when a member of Commander Porter’s crew becomes too interested in knowing what is happening the Solstice’s skipper is forced to decide between protecting his crew or upholding his oath by following orders. How far will the Omega Directive push him and his crew?