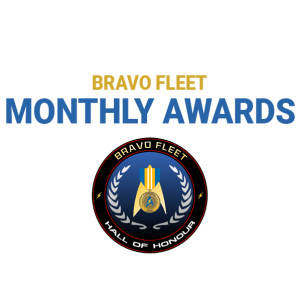 Welcome to the monthly awards for March 2020! These are particularly special, as they will be the last of their kind ahead of the imminent changes coming to Bravo Fleet. Going forward, our monthly awards for games and their players will go fleet-wide. Task Forces will be welcome to submit their nominations to the Office of the Chief of Staff, but there will only be one Player of the Month, one Sim of the Month.
So join me in this, the last of the Task Force-wide awards – where nominated – for Bravo Fleet players and games!

“Christopher has been with Starbase 38 and TF38 for a little over a month now and he’s already become someone that contributes regularly to the ongoing developments of both the base and the task force. He’s stepped up to the plate in a remarkable way, to the point of becoming TF38’s Second Executive Officer as well as the XO of our flagbase. He’s an excellent writer and has consistently demonstrated superior levels of commitment and thought in his participation with Bravo Fleet.”

“The VaQbach is a unique sim concept and has been incredibly impressive with its first month of activity, recruiting seven total players and already demonstrating a strong grasp of TF38’s overall canon plan and vibe. Kraytavi deserves this award because she’s managed to carve out a creative and interesting niche for herself and her crew. We look forward to many more excellent months of writing from this group!”

“Of a Personal Nature,” by Commander Roy Tanner, USS Apollo

“Coming back to Starfleet after ten years of retirement on a ranch in rural Montana, Commander Roy Tanner is pressed back into service. This post is an excellent look into the character’s psyche as well as showing a connection to his family, a connection that not all of our characters have but that all of them are likely thinking about as they get ready to embark on a journey to the Delta Quadrant.”

Selected by the TFCO for Player of the Month.

Selected by the TFCO for Post of the Month

“I nominate Lieutenant Commander Elsie Barnett again for player of the month. Without J, the person who plays her, I would be lost. They are my right hand, and have helped keep things going when times get tough. I am luckily to have him, and appreciate his support.”

“I have to nominate USS Shanghai. The Shanghai had no less than 17 posts in March 2020, almost all of which collaborative JPs, and one of which featured no fewer than 17 characters! The Shanghai has also been taking the initiative and planning out how its characters will transition to 2399. Some posts set ahead of the game’s relaunch have already been published. The stories they’ve told have been interesting; a good mix of plot and character work. It is an active sim, with a lot of good posts, and from what I see a diverse group of players. It’s focus on exploration as its mission profile reminds me of the days of TNG, where they were supposed to be exploring, but got thrown into the deep end. I look forward to seeing more from this sim.”