The Lore Office kicks off 2021 with the end of our first departmental competitions, the Operational Readiness Protocols! Rear Admiral Beckett cast his judgemental eye upon the ranks of the Fourth Fleet, its commanders, ships, and crew, and has assessed them… adequate.

But as Loremaster, I’m thrilled. These competitions have been more than fun and games, but labours of love. Every submission showed how much you all value your characters, your ships, and your work. It gives me great pleasure to reveal the winners here.

This was the most competitive category, so particular congratulations to those who placed!

A highly original character crafted with clear love and attention to detail, Captain Vordenna cuts an unusual figure among the commanding officers of the Fourth Fleet. This bio showed an excellent blend of the personal and the professional, and insights into an alien lifestyle and their approach to Starfleet.

This biography stood out for its attention to detail in charting the long career of a seasoned captain, excellently developed with the key events any Starfleet officer would have to grapple with over the last thirty years.

Like the above, this biography explored their subject’s career and personal life with detail, nuance, and atmosphere. But David’s work was tipped over the finish line by how he highlighted and explored the character’s flaws, conflict, and growth. Many Starfleet captains are brilliant, driven, and exceptional. This biography shows how such people often aren’t the easiest people to live or work with. That complexity and nuance took the prize.

All I Ask for is a Tall Ship

…and a star to steer her by. We had some grand variety in the flash-fiction competition, showing how captains first felt their ship was theirs.

The newly-promoted Lieutenant Commander Joryn Tarvos struggled to contain his excitement as he worked his way through the shuttlecraft pre-flight checklist. It was to be his first command and the time had come to inspect the ship and assume command.

Fifteen minutes later, he was on approach to docking cradle 6 of the Devron Fleet Yards.
There she was. The U.S.S. Gibraltar, Atlantia class.

A wide smile broke out across Joryn’s face, but there was something odd about her that he couldn’t quite put his finger on.
The view was of her ventral profile and unusually for a Starfleet vessel, she seemed a little intimidating. At that moment, he realized what it was. Her forward section was fan-shaped, just like the blade of a Vulcan Lirpa. She looked like a weapon.
Perhaps that was intentional. There weren’t many ships of this class and it was the first time he’d actually seen one. He was familiar with their reputation though, Harbinger-class some officers had joked. They were equipped to handle a crisis that had a mass-casualty potential and that meant that they tended to be deployed where the situation was expected to get worse.

The odd niggle in his mind was replaced with general anxiety, tempering Joryn’s excitement. Wherever this ship took him, he knew it was going to be a challenge.

From a distance, she had looked fairly small but up close, her true size was now apparent. Flying around her port side, she was bulky. No sleek, sweeping curves typical of Starfleet cruisers, and her hull remained thick with multiple decks even all the way aft, making her perfectly normal nacelles look short and stumpy. It was clear that her internal space had been maximized on every deck.

There were a lot of these sorts of entries – a captain seeing their ship for the first time. What stood out for me here was the more complex emotional reaction – the comparison of the ship to a weapon, and the apprehension this spiked in Commander Tarvos. That additional creativity and nuance won this entry third place.

As a doctor she wanted to be in sickbay, sleeves rolled up, as she helped in dealing with the incoming flow of wounded. Instead, she watched the viewscreen which had been divided up into sections, with one half showing the planet below and the other showing various metrics relating to the evacuation. This was the largest attempted evacuation since Romulus, and the Vulcan hoped that it went better. Her ship, an Atlantia Class that had been taken out of dry-dock after being mothballed, had been one of the first on the scene.

An Ensign at Ops looked up from their console, “Captain our sickbay is full, should I divert further injured to other ships?”

She shook her head, “No, start beaming medical beds from planetside hospitals to the ship, put them in corridors, the holodeck, crew quarters, even the bridge. Get supplies as well, then resume bringing in refugees. We will triage shipwide.”

It was nearly ten hours later that the Lieutenant Commander was able to relax, the ship was full. The bridge lights dimmed to provide a soothing atmosphere for the wounded who were being treated. Her own quarters had a half dozen beds in it, but they’d done what they could and as she looked around her bridge she realized that was what it was. Her bridge, on her own ship. Given to her under terrible circumstances perhaps, but at least for tonight it was hers and had done its part.

This flash fiction shows our commanding officer already in her position, but somewhat uneasy – with a doctor’s instincts, wanting to do a doctor’s hands-on work. This felt like a snapshot of that transition from doctor to captain, that difficult change.

Sometimes the best thing to do was to see it with your own eyes. Felrak’s mag boots clonked along the surface of the USS Bharani. The ship drifted, unpowered, far out in orbit of Qualor II. He’d learned a thing or two over the years, and when it came to starships he knew exactly what he was looking for. His last ten years as executive officer had been spent aboard the USS Pleiades; Century Class, state of the art. She had been a fine ship. Still was. But she wasn’t his.

He gestured over to Lieutenant Lupulo who carried a portable power unit in a magnetised container that looked not unlike a thick briefcase. Felrak crouched down, having located the airlock umbilical port. He slid back the protective panel and gripped the metal handle that lay underneath. Lupulo unhooked the power coupling from a harness on his back, plugging one end into the power unit. Felrak pulled back on the port handle, popping out the safety cover like a wine cork. Still crouching, Lupulo handed him other end of the coupling. After making sure it was clamped on securely, Felrak stepped back.

“Let’s fire her up.” He signalled to Lupulo.

As Lupulo initiated the EPS feed, the power unit began to pulsate. For the first time in almost fifty years, a light blinked on above the airlock in front of Felrak. The black hull paint, underscored by two red streaks and the Starfleet arrowhead, read ‘USS Bharani NCC-53891 United Federation of Planets’. Interior lighting stuttered into life, and the airlock door heaved open. Yes, this was his ship. Compact, unassuming and purely scientific, the spaceframe was still sturdy. After refit her designation would be Dumont Class, but under the duranium the heart of an Oberth still beat.

It’s a slow start. A procedural development; technical work. But it all builds to a hugely simple and highly evocative moment: the captain turns the lights on. I can’t lie, I made a ‘chef’s kiss’ gesture at the hull name being lit up. Outstanding work.

Okay. This category was hell to judge. Introduce your bridge crew and include images. What I got was a series of lovingly-crafted ensembles of interesting characters, and I cannot stress this enough: I genuinely loved every single submission. Please, hold your heads high if you submitted something. I love your crews, and I will demand to see more of them. But I still had to pick three, ultimately based on how well I felt characters stood out and a sense of crew was conveyed.

I had to stage a mini-battle royale between the crew of the USS Odyssey and their nearest rivals, judging just on the character summaries, to see who’d take third place. These characters stood out for how the descriptions concisely and effectively conveyed who the crew are, and gave a hint of how they worked as an ensemble. 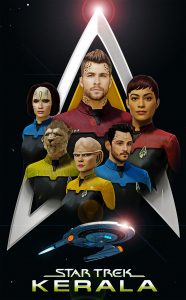 Back:
– Commander Odren Iladris, the newly promoted young commanding officer of the Kerala.

Front (L to R):
– Lieutenant Anati Vederet, the Cardassian chief science officer and second officer – A polymath with a flair for making jokes on long-dead languages.
– Ensign Raja R’Sarr, the Caitian security officer – Quiet, soft-spoken, observant and deadly with a phaser.
– Lieutenant Kezla, the Ferengi chief engineer; Whip-smart and proud of her culture, she is a true ambassador for the new wave of young Ferengi Starfleet officers.
– Lieutenant JG Firro, the Denobulan chief medical officer – Outgoing and always up for a party, he is well-loved among the crew for his bedside manner.
– Lt Commander Keira Lenneck, the half-Human/half-Romulan first officer – Insightful and very organised, she keeps the commanding officer on his toes and the crew in line.

An impressive demonstration of how less is sometimes more. The poster didn’t win points, just an ‘ooh’, but I loved these quick write-ups for telling me exactly what I needed to know about the most important faces on the USS Kerala – no more, no less. I already feel like I know who they are, and have some idea of how they’d bounce off each other. This wasn’t just a series of interesting characters – but a crew.

This entry delighted me, and not just for the original means of collating the information. But this was a succinct introduction to a varied crew, each with a strong snapshot of an introduction. The creativity of the personal quotations was the icing on the cake, the final touch which helped me understand each character, and sealed this entry’s victory.

And that’s the Operational Readiness Protocols finished! Huge thanks to everyone who submitted – it was indeed worth extending for some of the excellent further entries we got, which meant there was fierce competition in every category. I hope these helped people think about their dossiers and how to present them, even if you’re junior officers who haven’t yet got your own ships.

What’s next from the Lore Office, I don’t hear you ask? Well, I can’t spoil the surprise. But we’ve got something in the works.