The new year started off with the very last Task Force level group competition and I have to say it was a good turnout for the new year! I want to thank everyone who participated. There was participation in all the competitions which is great to see, and fun to judge. So without any more waiting here are the results of each of the competitions. 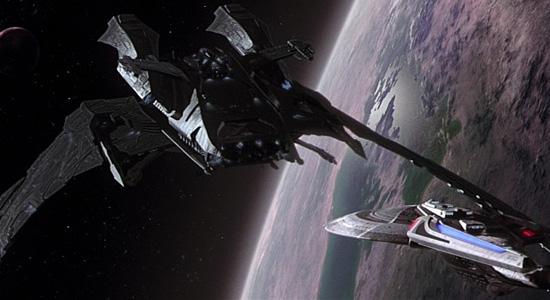 “Patience. Diplomacy is a very exacting occupation. We will wait.”

Over the years as first officer, Will Riker had come to trust his captain and mentor’s judgement, nevertheless the moment the monstrous vessel de-cloaked in front of them the hair on the back of his neck stood up instantly. The look he gave his Imzadi was enough to say he wasn’t impressed that the Romulans had decided to wait until now to show off their big guns.

Hearing Worf inform them all at how well armed they were only made his heartbeat increase in speed. He could hear Beverly’s voice in the back of his mind telling him to calm down. This was not like any other assignment the flagship of the fleet had endured before. Time travelling into Earth’s past to defeat the Borg felt easier than this, at least they knew what to expect from the Collective. Stopping the Son’a from destroying the Ba’ku was a simple fight between good and bad. The Romulans though…when it came to their politics no-one, not even the amazing Jean-Luc Picard could determine what course of action they would take. A new praetor to lead the Romulans, one that was Reman and had invited the Federation for a diplomatic mission. Admiral Janeway wanted them to get a lay of the land, see if the Empire would become unstable or not under their new commander-in-chief. Well so far the dark object before them didn’t look like any Romulan ship any of them had seen before.

Riker wondered, if he had been in that centre chair would things be different right now. What move would the Romulans take in this game of poker? Were they just about to blow the Enterprise to kingdom come? Would the signal of the incoming hail show their hand?

A Romulan I once met on Vashti told me that Shinzon was actually what Romulus needed. I told him exactly what I thought of that idea. A Picard clone, running the Star Empire? I know relying on Reman slave labour isn’t exactly what most would call being in great economic shape, but after all that Shinzon stuff it was clear which way the wind was blowing. If you ask me, the Empire would have fallen apart even without the supernova’s help. He wouldn’t stop though. The guy was convinced Shinzon would have held it together. Apparently, he had the Tal Shiar, military and the Remans all under his thumb.

I know when you’re face to face with a drunk Romulan it’s probably a good idea to just leave it, you know? They’ve been through a lot, and I can’t imagine how I’d feel if the Federation just evaporated overnight. But I’d had a few too, and I couldn’t resist. I know, I know, shoot me. So I said to him, “You know what, I think all these leaders, dictators, Emperors or whatever. I think they’re just fragile egos. I mean, why else would you even want to be unassailable dictator for life? I think their parents just didn’t give them enough attention when they were kids- well I guess that’s pretty obvious when it comes to Shinzon.”

Suffice to say the guy didn’t really appreciate it. He kept going on about Federation Presidents being exactly the same. Jaresh-Inyo? Aennik Okeg? The same? Inyo didn’t even want the job. I give up. I don’t know what they teach them in Romulan school about government representation, but if you ever end up drunk and talking about it with one of them, maybe change the subject.

Despite being entirely black, light from the nearby star picked out various surfaces of the massive ship. Sharp, angular wings and fins swept forward as though it had fangs and talons bared, ready to strike. Visually, it declared itself as an ambush predator. It loomed over the Enterprise like a giant black spider approaching a fly caught in its web.

Romulus lay far below the Enterprise, a verdant oasis in the harsh, dark cold of space. The invitation to the homeworld of the powerful, but secretive and insular Romulan Star Empire now looked like the bait in this predator’s trap.

Judges Comments: It was very hard to choose three as all the entries were good, these three were what really captured the picture that was presented very well.

Create a Romulan character from one of the three factions

Judges Comments: There were only three entries, they were all well written, and was very hard to choose between the three. They really described each character to the point you could get a sense of the character and their life. Great job to you all!

Judges Comments: Though there were only the three that entered the competition it was tough to choose who would go where, they were very well written and very detailed. Great job all of you!

Congratulations everyone on placing and participating in the competition!