“Ma’am, we’re venting drive plasma!” Lieutenant Chaucer reported, “Warp coil banks alpha, beta and theta in the starboard nacelle are fused.” The Operations Management Officer coughed, the smoke tasting bilious and metallic. In his ears, he could hear the sound of fire extinguishers rushing to put out the flames of what was formerly the Engineering console. He didn’t dare look to the side, knowing the nurses were about to transport Rory Faroe directly to Sickbay.

“Auxiliary power to the shields,” Commander Seval was an epitome of calm despite the Bridge around her being in chaos. She sat forward in the command chair, hands cupping around the ends of the armrests. She gave a cursory glance at the readings on her nearby console: shields were at 33%. Casualties on decks one, two, five, and six. Engineering was reporting severed plasma conduits in the starboard nacelle pylon. “What is the status of the K’maar?” She asked, turning her gaze back to the bank of stars, “Scan for life signs.”

The dark gray eyes of the Vulcan scanned the scene before her with the naked eye: the neck pylon of the K’Vort-class was severed and aglow with an internal fire. Even her Vulcan stomach turned: logic and experience suggested that meant no force field or containment door was in place. When Chaucer returned his report, she was unsurprised. She forewent eyeing the broken back of the Klingon vessel’s aft. “Very faint in the aft section. Their Bridge doesn’t have life support or power.”

The Vulcan’s brow rose while her eyes dropped. “If there are, Klingons do not wish to be rescued. It denies them Sto-vo-kor.” Her fingers flourished in a wave against the end of her chair arm. Denying herself emotion didn’t dampen the tension she sensed from such an assessment: Humans were always quite Human in their assertions. “Very well, then we are on our own. Lieutenant Good, status of weapons?” The Commander stated.

A brunette with Betazoid-black eyes had a smudge of grime across a fine cheekbone and squared jaw. Her hair bun was messed but she was poised. “Forward torpedoes are exhausted but we have aft. Phasers are recharging.” The small Rhode Island-class was out of its element in battle, as was much of its crew: most of the stunned Bridge staff donned blue shoulders. “No sign of the hostile. They’ve cloaked.”

“If we make for Lambda Eridon there may be Federation and Klingon reinforcements there. The D’Ghor tend to stay away from the system. They know its a rallying point.” Good suggested. “But it’s open space straight there.”

“We won’t make it on one nacelle,” Chaucer warned with a half-glance back at the Tactical officer. “Not anytime soon.”

“What about the planet?” Seval asked. In near-stereo, both Chaucer and Good raised their own brows.

“It’s a Uranus-type ice giant analog… about eighteen percent larger. Primarily methane, hydrogen, helium and some ammonia gas.” Chaucer eyed the bluish-green ball. “Is the Commander suggesting we try to hide in the atmosphere?”

Good grimaced, “I don’t recommend that with hull breeches, Captain,” she deadpanned, teeth born in her wince. She twitched her nose in thought, the glint in her eye from the flashing red lights eerie. “We have to fight or run. But it’s a long sprint to safety.”

“We can-” Chaucer began before the world erupted again. The light flickered as the hull trembled: once, twice, three, four times. There was a cry of pain and an explosion from below- a shower of the interior hull hailed upward. Then came the violent feeling of air, suddenly ice-cold, being sucked out of the lungs and bringing with it a taste of iron and gunpowder. A moment later it was over- and everything was dark save an anemic red flash.

Lieutenant Good felt a contusion on her forehead, throbbing, was leaking blood into her eye. And she tasted the coppery tang of it. Her hand throbbed and felt raw, even moving her fingers sent fire up her limb, Plasma burn. she knew. She rose off the deckplating anyhow, staring into the blackness of space where the main screen had been. The air was thin and cold and she wanted to choke- Good couldn’t tell if it was simply thin air or true panic that had her belly breathing.

Where the Captain’s chair had been was a collapsed hole clear through the next deck, if not several decks. “Chaucer?” Bailey swiped at her blinded eye with a sleeve and returned with the glossy streak of blood. But at least she could sort of see out of it now. She held her burned hand and arm against her breast. She could sense by the ship’s trajectory that they were listing and adrift. Her eyes widened as the K’Vort-class decloaked in the true black of space: for a moment Good sensed that only a force field was between her and the D’Ghor. She felt quite helpless and turned back to wonder if their shields had held at all.

She swallowed in a sweat-glowing throat as the green hull with its bird of prey markings swept back toward the wreckage of the K’Maar. Bailey expected to see them finish off the Klingon ship with disruptors but that wasn’t what came out of the D’Ghor ship. The K’Maar was bathed in the sickly green netting of a Klingon tractor beam. Her brows scrunched and she limped back to her panel. Cracking and flickering, she managed to track what the D’Ghor ship was doing. “Oh. You sick fucks…!” she deadpanned when she realized in horror what they were doing.

The aft section of the K’Maar, helpless, was being dropped into the atmosphere of the ice giant. Her stomach turned and she checked weapons. A few short bursts at best. She locked onto the D’Ghor ship anyway and fired. Reload. Aim. Fire. Reload. The recharge time was agony. Aim. Fire.

That was when she heard the sound of Klingon transporters. She looked up to see a trio of figures, cast in red, with helmets and furs. One snapped a wrist with a flick and out telescoped a long polearm with a glowing red ember at the end. Bailey’s eyes widened: fire pike.

The Klingon with the pike tilted their helmeted head. In the darkness, Bailey couldn’t see their face. She prepared herself to die.

The Klingon spoke in their language- it was female. “Che…” The Klingon taunted.

Bailey took a half step back, knowing exactly what that smoky-spoken word meant. It meant run. The Human pulled her phaser, squaring her jaw. “Heghlu’meH QaQ jajvam!” She sneered back, baring bloody teeth.

First off my apologies on getting out this report six days after the goal I set for myself. I have no excuse except for having other projects I have been working on. It has been a quiet month in Task Force 86. We have gained several new cadets who are moving through the ranks. A special shout out to them for their dedication to Bravo Fleet! I would like to thank my Executive Officer and Chief of Staff, Nate, and Bren, for all the work they do behind the scenes. They are largely the thrust that keeps our records and reports your activity. Bren is a recent addition to our staff and I cannot be more pleased with how quickly he has learned and adapted to this system.

This month, Task Force 86 set out its first fleet-wide competition in the form of the “Design a Klingon House Emblem,” contest. We had some great entries and I thank all the competitors for bringing their game to our corner of Bravo Fleet! Thank you! Congrats to Cath, Christopher, and Paul on placing! 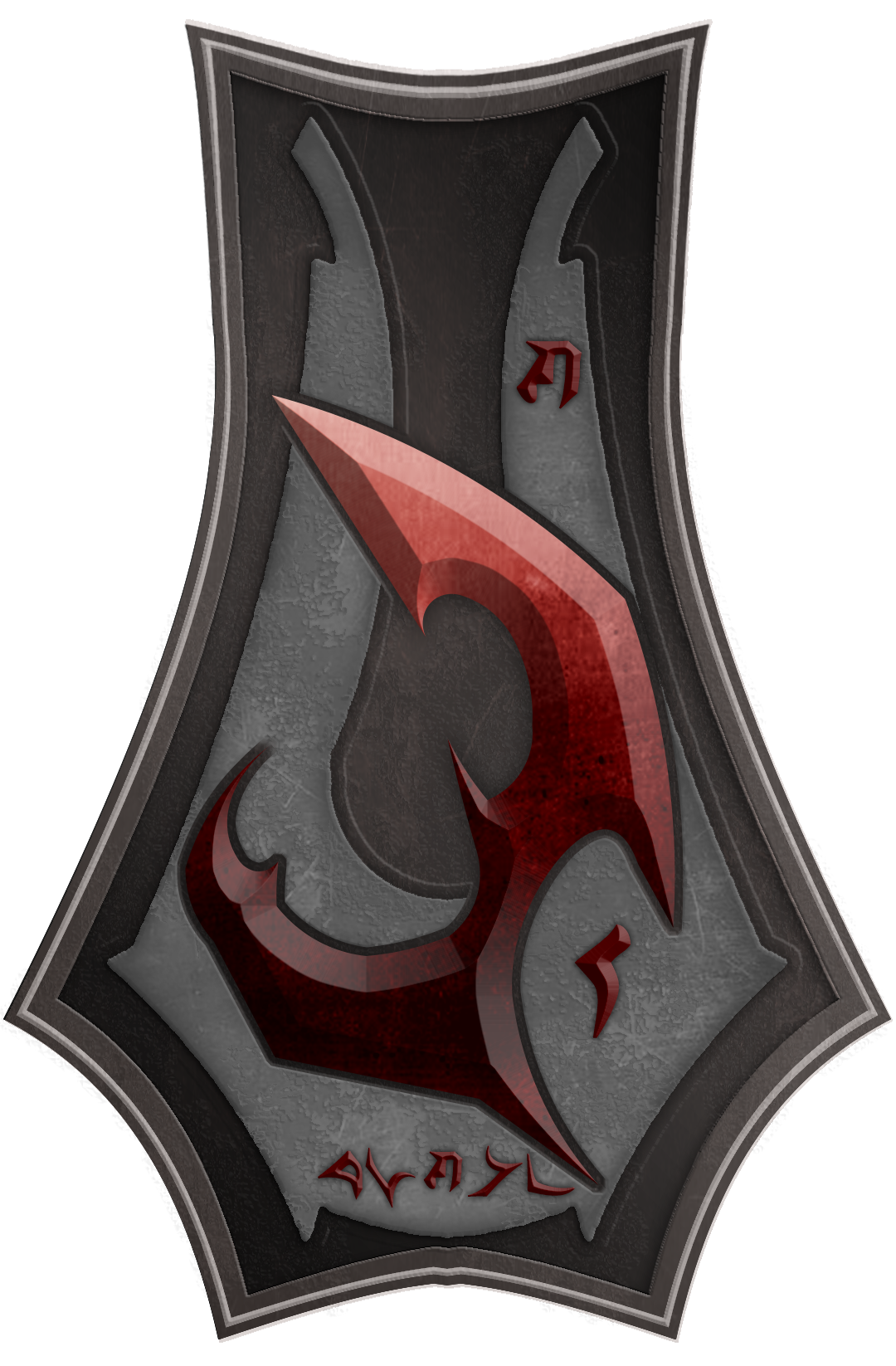 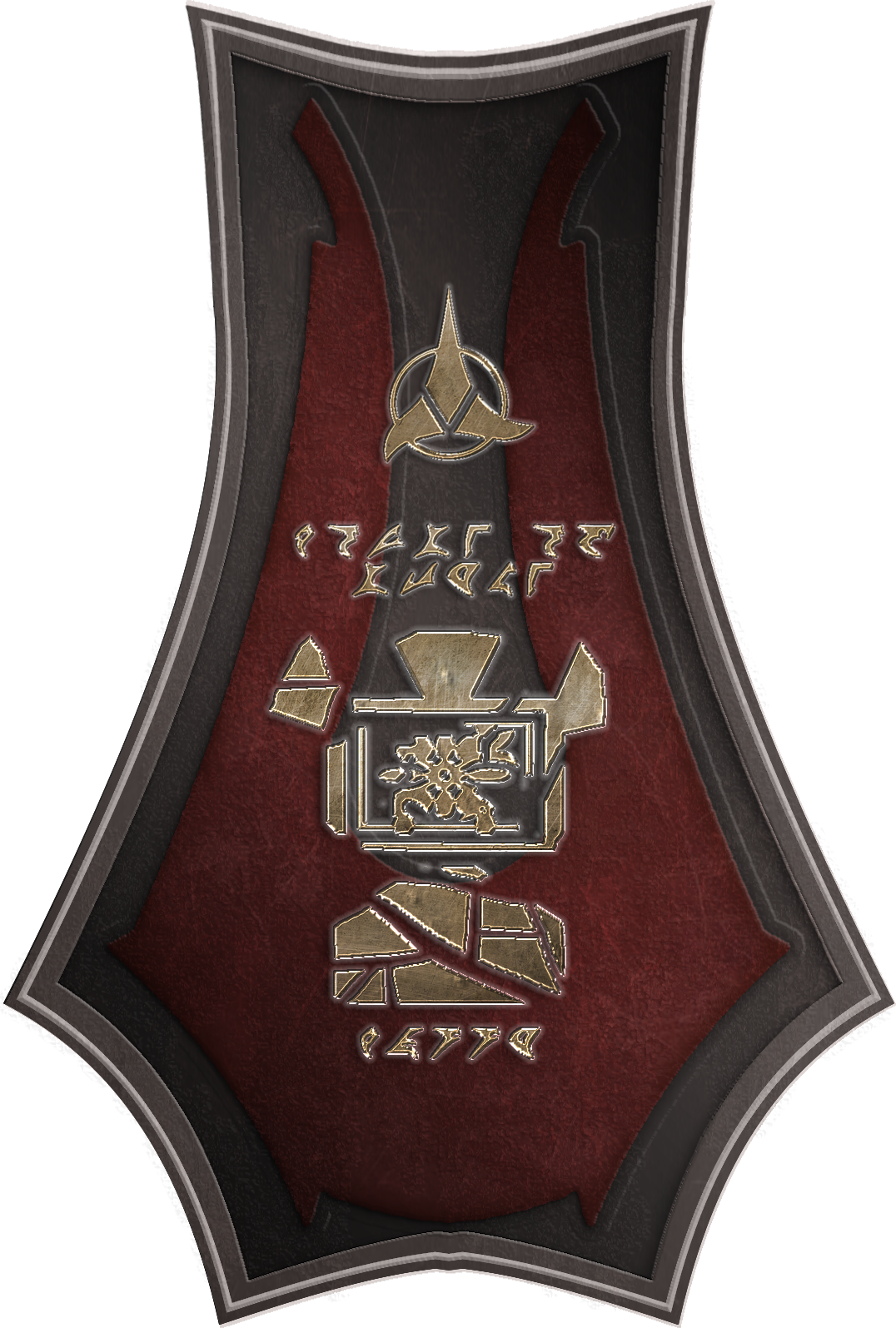 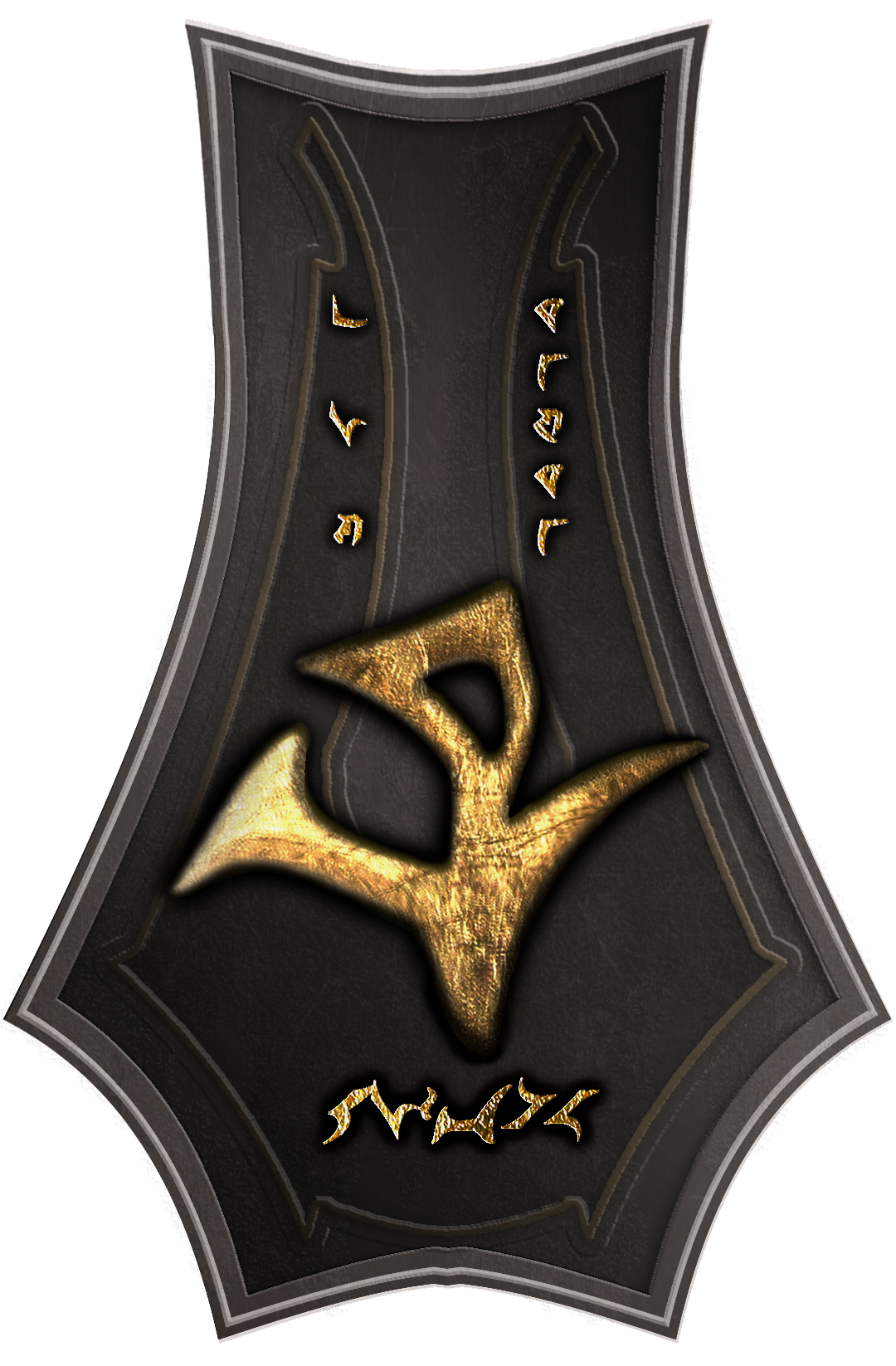 July Spotlight: The Hunters of D’Ghor 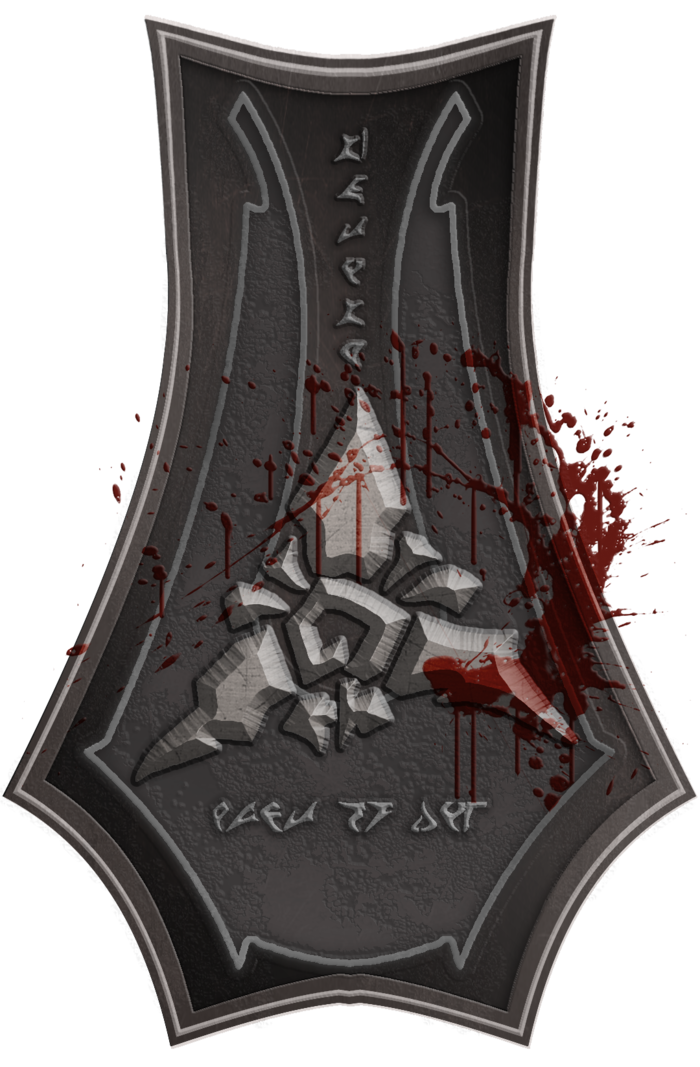 The Hunters of D’Ghor are one of the most serious threats to individual ships and small convoys on the Spinward frontier. Though the Federation and Klingon Empire have weathered crises such as the Raids on Archanis and the Sovereignty of Kahless, but the D’Ghor are unique in their nihilistic tactics: they do not care if they live or die, nor do they care for preserving the honor of those they fight.

The D’Ghor have a wide and sporadic range which makes it further difficult for them to be hunted. They have been detected as close to Federation space as Nimbus III and the Azure Nebula. They also harang the Rimward frontier of the Romulan Republic. The bulk of their activity, however, is a projection from the D’Ghor Nebula in a cylindrical shape out into unclaimed space.

The High Council is quite sure that the D’Ghor are using their namesake nebula as some type of a base. The problem is, the D’Ghor know the nebula far better than the rest of the Empire. Up until now, the Empire has been somewhat willing to let them contain themselves in there and just waste away, but now there is increasing pressure to take action.

Updated Map for the Klingon Empire

One of my goals as Task Force CO was to provide an expanded map of the Klingon Empire and the surrounding space so potential future sims might have a greater idea of how to explore space but still maintain that feeling of being near the Empire.

A few (hopefully tantalizing?) teasers for future monthlies: what is the Lomqa’ Exclusion Zone and why do the Klingons keep it so hushed? What is Rura Ch’Im? Why does it sit within a “star desert?” What is the Rotarran Terminus Line and what do the Klingons fear within that maelstrom?

The Klingon Empire is also big, really big. Within are a number of subjugated “client” and “tribute” worlds- many with native species that have been under the yoke of Klingon control since the Empire’s inception. Many of these subjugated worlds are mining worlds and agriculture worlds that fuel the Klingon system. They are often directly controlled by the Houses Minor and the Banner Houses of the Great Houses.

Within the next month, Task Force 86 hopes to get its premade sims up and running! These premade sims are open to anyone of Lieutenant FG rank or higher who want to run a Sim, but perhaps don’t know exactly where to start. Some of these premade Sims are also somewhat experimental! Within Task Force 86, we have two in particular who are intending to stretch what we know about the Federation and the Klingon frontier.