Hello Bravo Fleet! Finally, the thing you’ve been waiting for, for an entire… 48 hours! The Raptor’s Wings results!

Suffice it to say, the results were far above and beyond what the BFA expected for our first fleet-wide Fleet Action (essentially our top-of-the-line BFA ran events) event ever. I will break down some stuff, but we had a total of 251 entries totaling 1740 points across 42 individual participants. For our first one, ever!

I had expressed it several times before, but the end results all came down to participation. By the third phase, which had the most overall entries by quite a bit, people had caught on to how important it was to just participate. That was the name of the game for this event: we wanted to get people into doing these sorts of comps, seeing that we value their time, and enjoying what they were doing even if they couldn’t entirely complete everything! There were even events in Phase I that only had one participant, so they got first place by default! Even a half-completed submission is better than none at all.

The feedback you guys gave during the event and on specific competitions was also great, and immensely useful for future events! We probably won’t have a Fleet Action event at least until the end of this year, but I expect that your individual task forces will be running events and there may be fleet-wide events run by some of the BFA that aren’t necessarily Fleet Actions; stuff more geared towards a theme like the Gaming or Lore Office. But I digress, results!

For the task forces, the results were directly correlated between participation and overall points. I’ve created two charts which, at first glance, may look to be the same but are not: 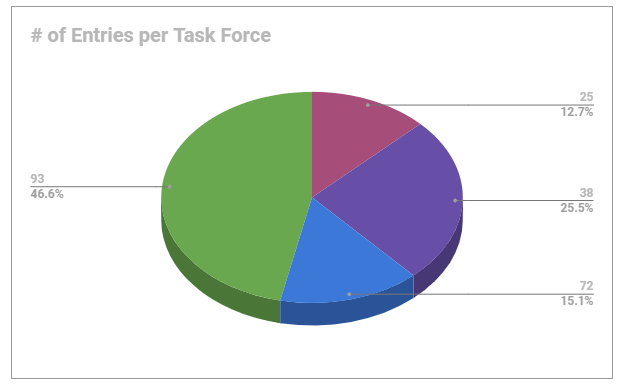 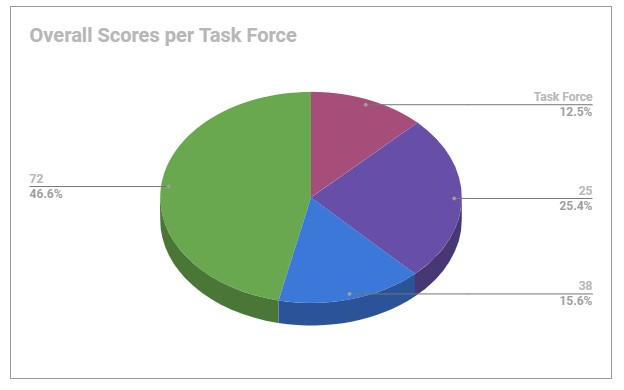 As you can see, the task forces who participated the most, got the most entries. Placements were all across the board for task forces with no one task force really bringing home the bacon, so members of task forces placing took home individual glory of sorts, but that barely budged the overall numbers. A huge congratulations to Task Force 93 for coming out as top dog among the task forces! Bragging rights to you guys!

And now, the individual competition winners! Prepare for glory!

And the overall top 3 individual winners are…

If you have any questions about anything related to the event, do not hesitate to ask. We have all the data so if you’re looking for how you did specifically, or where you ranked overall, we can definitely tell you! All awards for individual comps, placements, and challenge coins will be handed out this weekend.